Jason was enjoying a warm, summer day at the beach with his girlfriend and all their friends, then a pulsing buzz suddenly dissolved the image and pulled him out of sleep. His arm reached out and shut off his alarm clock. He groggily opened his eyes. The red digital numbers of the clock glowed 5:30. This is crazy, he thought, I should stay in bed. He wanted more sleep, but remembered going to bed at nine the night before so he could wake up early and go jogging. He struggled against the lure of sleep, then finally tossed the covers aside and forced himself awake. He slid around, let his feet hit the floor, and stood up. He slowly walked around in the darkness and gained alertness. Can’t remember the last time I was up this early, he thought, forgot how hard it is. He put on a T-shirt, then searched around and found his sweats hanging on the back of a chair where he had placed them the night before. He stepped into them and pulled them up as he continued to motivate himself. He sat on the chair and put on his socks, then slid into his new running shoes and double knotted the laces. He stood up in his shoes. They felt stiff, but loosened a bit as he walked around in them.

Jason then put on a fleece sweater and left his room. He quietly walked into the kitchen careful to not wake his sleeping family. Ambient light came through the kitchen window and showed everything in silhouette. He got a carton of fruit juice from the refrigerator, poured himself a glass, and drank it down. The cold hit his stomach and awakened him more. He put the empty glass in the sink and went into the foyer. He stretched forward and tried to touch the floor, but couldn’t reach. Used to be able to do that, he remembered. He then grabbed one foot, pulled it behind him and stretched his thigh muscle, then did the same to the other leg. He breathed in deeper and tried to psyche himself for the run ahead. He reached for the door, then hesitated. Another couple of hours of sleep sure would feel good, he thought temptingly. He then reminded himself of his promise to get back into shape, twisted the deadbolt lock, and opened the front door. The cool outside air wafted in and he breathed it in. He was further awakened and went outside. He picked up the newspaper, left it inside the house, then closed the front door and walked into the quiet predawn. 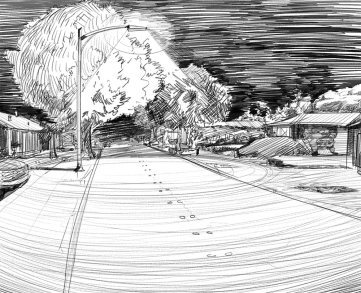 Jason stood on the lawn of his front yard surrounded by the early morning chill. He looked around his neighborhood of similarly designed tract houses. Their varying colors and outside appearances were still hidden in darkness. He felt a rare solitude as he looked down the street to get a sense of the distance ahead. Overhead street lamps shone yellow and lit his way. He took a few more deep breaths until he was sufficiently motivated then broke into a sprint.

Jason ran down the sidewalk and sailed through the cool air as he passed by houses, front yards, trees, and parked cars at an even pace. He came to an intersection, ran across the street, and strode onto the next block. He heard only the sound of his running shoes hitting the sidewalk and was feeling good, then felt the first signs of fatigue sooner than expected. His pace slowed. I got up hella early to put myself through this? he thought irritably, but he breathed in deeper and kept pushing forward. He found the right stride between his old jogging speed and his present effort, and the fatigue went away. He felt warm all over and no longer noticed the early morning chill.

The sidewalk ahead of Jason curved one way then went straight again. His thinking was becoming more clear as his circulation increased, and he began to ponder his current life situation. Too much sitting at my job, he admitted, I’ve already gained a couple of waist sizes, don’t want to get soft. He lamented his job further, then reminded himself how lucky he was to get it. A friend of a friend who worked there put in a good word for Jason so he was able to avoid the application pile in human resources. He felt he ought to be thankful, but he also knew he was not working at his dream job and that it might be time to see what other options are out there. He recalled the recent change in ownership that brought in new upper management people and pushed out a lot of the old. And none of those new people know me, he thought, which means there goes my chance of moving up in the company, unless I’m willing to suck up. His lack of a future at his workplace became more apparent and he felt stuck. He thought of people he knew who had decent tech jobs then were laid off because of cheaper competition, bad business decisions, or a sudden change in the economy. Same thing could happen to me, he worried, but I can’t get off one treadmill unless there’s a better treadmill to jump onto.

The dark sky was gradually lightening as Jason traveled further away from home. He revisited the plan for his life he made back in high school. Been in community college longer than I thought I would, he told himself, probably because of work. He wondered if the classes he needed to transfer to a four year college were still available or victims of budget cuts. He then tried to figure out the cost of more higher education, and the possibility of debt weighed on him. His hope of graduating college slipped further into the future until it seemed to disappear. Really hoped I would’ve been further along by now, he thought forlornly. He recalled how easy it was to make plans back when he and his friends were all seventeen and eighteen. When we were all in it together, he remembered. Now the struggle seemed bigger than he imagined, and felt more solitary. He wondered if everyone else felt the same. Can’t fall behind in school though, he told himself as he pushed ahead.

A lone vehicle driving down the street broke the silence. Its glowing headlights reminded Jason that dawn had not yet arrived. The car and its headlight beams turned onto a main avenue and headed uptown. His pulse settled to a steady beat and his breathing deepened, but he didn’t feel he was in the shape that he once was. He then wondered if his girlfriend didn’t like him getting out of shape, though he couldn’t recall her ever saying that. Maybe that’s why Christine said I should work for her uncle and his contracting business, he thought, wants me to do something more physical. He felt he should be the one to decide on what to do with his life, but he couldn’t help but think that she might be right. I used to be able to jog five or six miles at a time, sometimes more, he reminisced, back when I was playing ball and being more active, now look at what’s happened. He ran faster, then his breathing became more labored. He slowed back down to keep moving.

Pains shot up his ankles and Jason slowed a bit more. He veered from the hard concrete and onto the strips of lawn between the sidewalk and the curb. The impact of his footfalls softened and he kept his pace. He looked at the rows of houses in the faint glow of approaching light. Their colors and outside features were beginning to show and look more familiar. A couple of people dressed for work were were getting into their cars.

Jason approached the end of the block and another intersection. He slowed to a stop at the corner and considered where to go. He breathed heavily as he looked at the road ahead through his suburban neighborhood and wondered how much farther he could go, then looked back and considered jogging back home. Then he looked down the cross street that led to the southern foothills. The hills looked especially daunting in his tired state. He remembered how used to run up them when he was in high school, and wondered if he still could. He felt enticed. Well, I’ve gone this far, he figured. He began jogging to the hills. 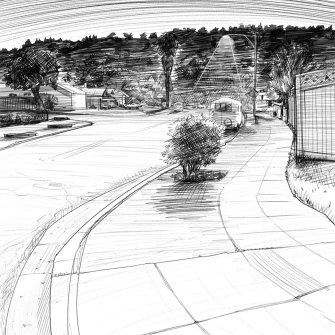 Dawn was rising over the eastern Mount Hamilton range and slowly brightening the valley. Steep foothills covered in dry blond grass with patches of manzanita bushes and scattered live oaks lay ahead as Jason approached. The grade of the sidewalk began to rise and he felt the increased burden. His strained to keep his pace but slowed. He bemoaned his recent lack of activity. Can’t let that happen again, he told himself.

The street ramped higher into the foothills and Jason pushed himself harder. The row of houses stopped, then the sidewalk and pavement ended. He stepped off the concrete and continued jogging up a dirt path. The urban environment disappeared and open land surrounded him. The softer earth lessened the impact, but his pace slowed to a trot as the path rose up further, curved to the hill’s contour, and climbed steeper. He pumped his legs muscles harder and tried to keep his traction on the dirt as he slowed further. He struggled against the growing fatigue and focused on a flat area at the top of the trail. He breathed rapidly and his heart raced. He slowed to a crawl as he willed himself upward. Sweat beaded up and dripped off of him. Some of it ran into his eyes and burned.

He fought his way up until he finally made it to the small terrace on the front slope of the hill. He stood on the level ground hunched over with his hands on his knees while still breathing hard. He felt a big sense of relief as he finally caught his breath and stood upright. He walked around while still panting, then his heart rate and breathing gradually slowed down. He was happily exhausted and marveled at how much more difficult his accomplishment was than he had imagined, and was even more surprised that he had made it.

Daylight was spreading across the valley. He looked down on the giant maze of suburbs and pavement. Street lamps were turning off as the artificial yellow light gave way to the orange glow of the morning sun. More and more vehicles coursed through the streets as the city came to life. He looked ahead to the clouded far north of the valley which lay obscured by the mist of south San Francisco Bay. Jason surveyed the entirety of the Santa Clara Valley and saw it anew. All those neighborhoods and all those people, it can take all day to get across the valley when traffic is heavy. He then put his hands on his hips in satisfaction.  Doesn’t look so big from here, he thought victoriously.