Tomorrow night on AMC is the long awaited premier of the fourth season of Better Call Saul. I was planning on making predictions for the upcoming season on this post like I did last year in the run up to season 3, but I’m having a hard time figuring out what to predict. What I have to go on is the ending of season three, the various promo commercials that have already been aired, and a couple of reveals that were leaked by Vince Gilligan, Peter Gould, and some of the cast, but taken together there are so many moving parts that it’s difficult to make any kind of accurate or semi-accurate predictions. But I’ll give it a shot.

Among the clips shown in promo commercials are scenes from Chuck McGill’s funeral, so now we know for sure that he died in the fire that he started in the last episode of season 3. But there are so many questions surrounding his death that need sorting out. First, what’s in Chuck’s will? Jimmy would be the legal next of kin, but did Chuck instead leave everything to his ex wife Rebecca? Even though they’re divorced they still care for each other, so it wouldn’t be a surprise if he made her the executor of his estate. Or did he die intestate? A lawyer would probably have a will made up, but we don’t know that for sure. Also, will his death be determined to be an intentional or accidental suicide? This is important if he had a life insurance policy, which normally don’t pay out in cases of intentional suicide. It’s also been revealed that Howard Hamlin makes a stunning confession at the end of episode 1, and I’m having a hard time figuring out what that could be. It may have to do with Chuck, or it may have to do with Hamlin, Hamlin & McGill, or both, or neither because it has something to do with his personal life. I’m looking forward to finding out. I’m going to predict that Chuck made Rebecca his executor, that his death will be ruled an accidental suicide, and the last words he said to his younger brother will haunt Jimmy and push the transformation into Saul.

The other main story line is the merging of two worlds of Nacho Varga and Gustavo Fring. Though they are in two different camps, Nacho’s switching of Hector Salamanca’s pills is suspected by Gus after Hector’s stroke or heart attack (not sure which it is). This brings Nacho into Gus’ notice, and no doubt will cause him to take some kind of action, because as he’s already made clear, he decides when and how Hector dies.* Nacho was already skating on thin ice in season 3, especially when he switched out Hector’s glycerin pills in an effort to save his father from the cartel. From what’s been shown on the commercials and in stills like the one above it looks like the danger will continue for Nacho in season 4, but how it’ll happen seems complicated by other factors that will come into play. What happens to Nacho will depend on what Gus’ finds out, what he does with that information, how the cartel reacts, and who will succeed Hector in the hierarchy.

Another factor that will affect Nacho and Gus will be the introduction of the character of Lalo, who was mentioned in the same Breaking Bad episode that Nacho was mentioned in (episode 2/8, the one titled Better Call Saul). Lalo is probably sent by the cartel to bring order back to the chaos, but his lack of presence in BB makes him shadowy. As it appears now, Nacho will either end up dead, or he’ll go into hiding (perhaps with help from the vacuum store owner/identity changer). I read a comment on a fan page which predicted that Tuco would end up killing Nacho because eventually he’ll be released from jail to look after Hector once he’s wheelchair bound, and that will give Tuco the opportunity to kill him.

Nacho wants no part of the cartel and fears for the safety of his father, so whatever he does or whatever ultimately happens to him will have to do with those two motivations. If I had to predict, I’d have to say he ends up dead, and it will be tragic. 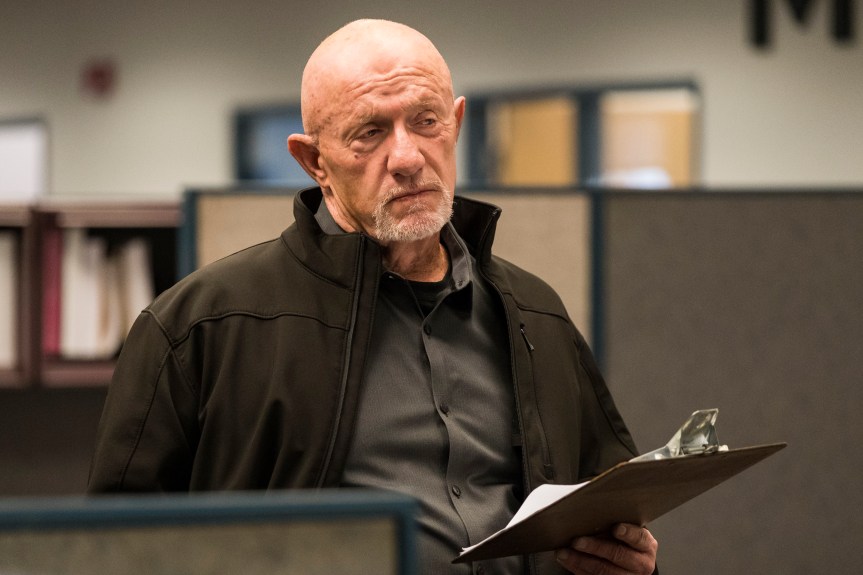 The storyline that ties them all together is Mike Ehrmantraut, the connector between Jimmy/Saul and the world of the criminal underground. At the end of season 3 he is working for Madrigal Automotive, part of the conglomerate that’s also partnered with Gus Fring’s Pollos Hermanos. Eventually Mike will be working directly for Gus, but in the mean time he’ll do what Mike does and investigate his new employer. No doubt this will cause tension, Gus is highly secretive of his Chilean past, but somehow the two of them will come to an understanding. How this comes about is the mystery, but I’m predicting Mike will realize he will have to give up some of his independence if he want to survive in Albuquerque, and Gus will realize that Mike is as close to a perfect employee as he’ll ever get (sorry, Lyle). And if anything is revealed about Gus’ past, I’m going to predict that he was involved in the Pinochet regime, and possibly a CIA asset.

But the biggest tragedy of season 4 will be the death of Jimmy and the birth of Saul. Not only will this be a transformation of his soul, it’ll be the end of his relationship to Kim Wexler, the only person left in the world who loves him. With his family all deceased, as well as his best friend Marco, Kim is Jimmy’s last tie to humanity, and with her out of his life there will be nothing to stop from Jimmy becoming Saul. How this comes about will be Kim unwilling to accept Jimmy’s morphing into Saul, but how this happens is the part we’ll have to see. Some think Kim will die at the end of 4, but I really hope not, she’s the heart of the show. I think Kim will survive, but it’ll be with a broken heart.

And all the roads of the BB/BCS universe lead to Gene, the hardest to predict wildcard of all. From the clip that’s been shown and a couple of pictures taken by a fan that shows Gene leaving the hospital and getting into a taxi, we know that Gene is almost discovered by a hospital administrator who needs to see his ID again but somehow he makes it out of the hospital. What happens after is open to a number of possibilities. Perhaps the process of his eventual discovery was triggered by the hospital visit, and he may have to go on the run again, or maybe he’ll stay and make a stand, or maybe he reaches out for help from someone from his previous life. But which previous life, Jimmy or Saul? One of the main themes of BCS is identity crisis, and in the end, the identity he chooses to pursue will be the biggest decision he’ll ever make.

But as I keep saying even though some disagree, I think the Gene sequences are simultaneous to Walt’s exile in New Hampshire in the final episodes of BB, and not after as most others claim. This is the scenario that makes the most sense. Once Walt is dead the case is closed. The DEA may just assume that Walt killed Saul before he went into hiding to get rid of a loose end, they did disappear at the same time, and the DEA may downgrade the search for Saul to a low priority. No one will miss a crooked lawyer, no one will look for Saul, and after a number of years he may even be declared legally dead. All of this will give Gene a certain amount of freedom that he wouldn’t have during the manhunt to Walt.

Most or all my predictions my end up wrong, but it’s unpredictability that makes BCS compelling. What started out as an idea for a half hour sitcom has become a prequel that matches its predecessor in quality, is growing to the same intensity, and is one of the most original shows on television. I eagerly look forward to the premier of season 4, and after I see the first episode I’ll be able to refine my predictions. What I do know for sure is that the cast, crew, and creative team of BCS are among the best in the business.

I like to think I see things in people.

*And lucky for Gus, he’ll be there when it happens. 😀

UPDATE: So now that I’ve seen episode 1 I have learned about Howard’s big reveal. I wasn’t sure what it would be, but it does make sense that Howard would feel guilt over forcing Chuck to retire because of his increased insurance rates. And Howard’s suspicion that Chuck may have actually killed himself on purpose proves my supposition that the fire was determined to be accidental. Howard’s confession also seemed to absolve Jimmy of his responsibility, at least in his mind, so now he can become Saul.

And who was that mysterious taxi driver in the opening Gene sequence? Apparently he has a connection to Albuquerque, maybe he was one of Saul’s old clients? I have a feeling things are about to blow up in Omaha.

UPDATE: The mystery of the possible connection between Gus and Nacho was answered in a big way at the very end of episode 2. The end of the episode also explained why it was titled Breathe, a cruelly ironic title it turned out. And how about Kim tearing Howard a new one for messing with Jimmy with his confession. The claws came out!

UPDATE: Poor, poor Nacho, no turning back now. But at least we got to see the shady veterinarian again, working his illicit surgical magic on Nacho’s counterfeit bullet wounds. I wonder what the value of Arturo’s Oldsmobile 442 was before it was destroyed? Those old muscle cars are worth bank. As for Chuck’s final letter to Jimmy, a lot of people have suggested that Kim actually wrote it, but that makes no sense at all. That goes against Kim’s character, and the letter sounds like it was written before Chuck and Jimmy’s relationship worsened. I finally made a prediction that came true! But admittedly, I did see Ira in the IMDb in the credits, but I remember from BB that his specialty was burglary so it made sense that he was the one breaking into the Neff office, which they showed in the promos. Looking forward to episode 4.

One thought on “Countdown To Saul”