I am counting the days until the season premier of a television show, something I almost never do.  Season 3 of Better Call Saul will premier (finally!) on April 10th on AMC, and in a time of unprecedented turmoil and revolutionary foment, it is one of the few bright spots to look forward to in this crazy year.  Those of you who are fans as well are no doubt eagerly awaiting.

WARNING: SPOILERS AHEAD!  FOR BOTH BETTER CALL SAUL AND BREAKING BAD! 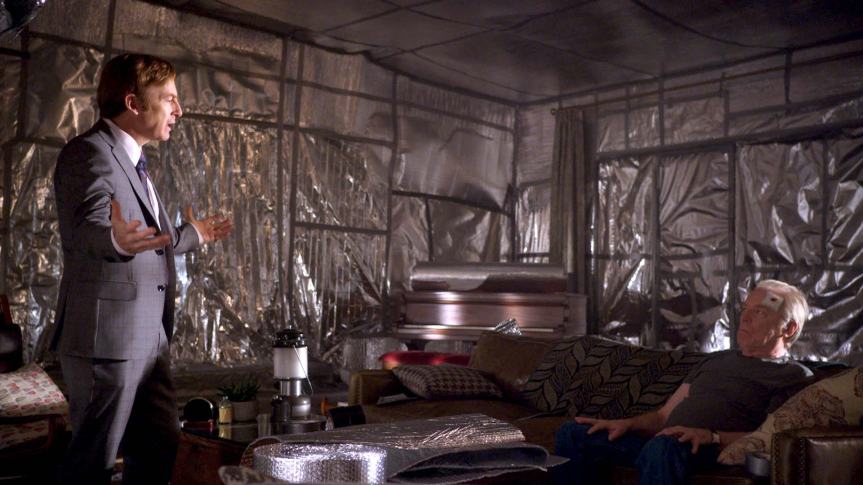 Now when we last saw Jimmy at the end of season 2 of BCS, he had just admitted to his brother Chuck that he had indeed doctored the paperwork for the Mesa Verde project and bribed the employee at the copy store to keep quiet.  And after Jimmy leaves Chuck’s house, it’s revealed that Chuck was secretly recording their conversation.  At the very least Chuck has the evidence to get Jimmy disbarred, with possible criminal charges. 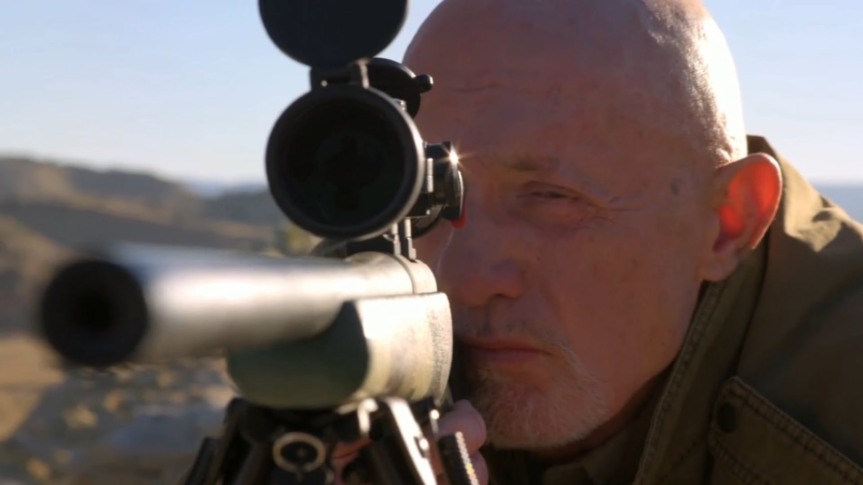 In BCS’s parallel story at the end of season 2, we see Mike Ehrmantraut about to kill Hector Salamanca with a high powered rifle from a far distance when he’s interrupted by the continuous sound of a car horn.  As he investigates he sees that someone stuck a branch in his car to sound the horn and had left a single worded note on the windshield which reads DON’T.  Since it’s been subsequently revealed that Gustavo Fring will be in season 3, it’s not to difficult to guess that Fring is responsible for the interruption.

So what’s going to happen next?  And how are these two story lines going to intertwine?  The Mike story seems a bit easier to figure out.  Assuming it’s Gus, or rather one of his henchman (I’m guessing Victor) who sabotaged Mike’s assassination attempt, it must be because Gus has bigger revenge plans for Hector.  But how did Gus find out about Mike?  My guess is Mike ended up on Gus’ radar screen when Mike engineered the scuffle with Tuco that got Tuco thrown in jail.  Gus no doubt watches every move the Salamancas make (their back story shown in Breaking Bad explains why), so when somebody out of nowhere gets one of the Salamancas sent up, that would certainly get Gus’ attention.  At this point Gus would look deeper into Mike’s history and find out about his past with the Philadelphia PD.  He also would have put a tail on him, otherwise he would not know about his assassination attempt on Hector.  The only other way Gus would know would be if he had someone on the inside of Salamanca’s operation.  Nacho Varga perhaps?  I’ve seen this suggested on other BCS fan sites, and it seems plausible.  Would Nacho really order a hit on Tuco on his own?  If Tuco’s death allowed Nacho to rise up in the organization, that would make him a prime suspect.  Either way Gus would see an ally in Mike, and with Gus’ protection Mike would no longer have to be a lone wolf taking on an entire organization.  It’s safe to say season 3 will see an alliance between Gus and Mike, and a furthering of Gus’ chess like plans.

But predicting Jimmy’s story line in season 3 is a little trickier.  We know Chuck has incriminating evidence on Jimmy which Jimmy is seemingly not aware of.  We also know there’s the ongoing fight over the Mesa Verde account between Kim Wexler and Hamlin, Hamlin, & McGill, which will probably go to Kim after Chuck’s embarrassing behavior at the banking commission hearing.  And we also know Jimmy and Kim love each other, but that they also have a different set of morals.  I predict Chuck will take the incriminating tape to Howard Hamlin first, then he, or they, will make a move against Jimmy.  When that happens, Kim will then see the evidence proving Jimmy’s chicanery, then she’ll have to make a decision about her future with Jimmy.  For the sake of her career and her future, Kim would probably have to end their relationship, which will be heartbreaking for both of them.

However when Chuck plays his hand, with or without Hamlin’s assistance, it is not necessarily going to mean the end of Jimmy, or his law career, and this will be when the Mike story line reconnects with the Jimmy story line.  To be sure Chuck does have Jimmy over a barrel, but there people out there that need the services of a lawyer with flexible morals, people like Mike, and his future boss Gus.  One of the looming conflicts will be between Chuck who wants to take revenge on his brother, and the Mike/Gus consortium that wants to keep Jimmy is business.  There are a number of ways this can happen because there are other factors involved, like Chuck’s psychosomatic fear of electricity, or the reason why Chuck is no longer with his wife Rebecca, which could play out in the final conclusion.

I’ve also looked to Breaking Bad to find clues for what’s going to happen in BCS, but they’re sparse.  In BB, we only see Jimmy as Saul, and we don’t see any part of his personal life.  There is also no mention of Chuck, Kim, or Howard, and there’s only a brief mention of Nacho.  This leaves it wide open for what’s going to happen in season 3.  Do they survive into the BB timeline?  And if so, is there still a relationship with Jimmy/Saul?  interesting to speculate. 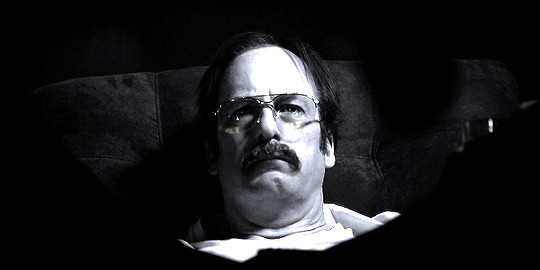 But with all this said, there’s still the one wild card of BCS which is hard to predict, Gene.  Whereas with BB you knew it was going to end with Walter White’s death because BB was constructed like a tragedy (among other things), and he was dying of lung cancer.  The ending of BCS, which seemingly will end in the Gene storyline, is a little harder to predict because it can go in a number of directions, all of which depend upon what BCS is.  If Gene blows his cover somehow and gets himself killed, that would make BCS a tragedy.  If Gene remains where he’s at managing a Cinnabon in Omaha, NE for the rest of his days, that would be like a tragedy in slow motion.  If Gene gets caught by law enforcement, then BCS becomes more like a regular crime drama, or possibly a courtroom drama, with Kim coming to his defense (assuming her character is still around).

My prediction of the Gene storyline is that it will play out like an identity crisis.  When Saul becomes Gene, it is at the same time that Walt disappears into exile in New Hampshire, so when we first see Gene it is simultaneous to the last two episodes of BB.  But eventually Walt will get killed, and it will be national news.  When this happens, along with the deaths of Jack Welker and his gang, the end of their meth operation, the finding of all the money they got from Walt, as well as finding out where the bodies of Hank Schrader and Steve Gomez are so they can get a proper burial, the DEA may go a little easier in their case against Skyler White.  This will give Gene some more room to move around.  He will follow the ongoing case intently, and when the opportunity is right he will reach out to someone from his former life.  But which former life, Jimmy or Saul?  Over the course of his life he has three different identities, and he’ll have to decide who he will be for the rest of his days.  Each identity has its own risks, so it’ll be a difficult decision.  He’ll have to look into his heart and find out who he really is.

All these predictions are conjecture of course.  There are other BB characters who can still make an appearance (I read on another post that Robert Forester, the vacuum cleaner repairman/identity changer will appear on BCS), and there are still other characters and situations which are unknown now but may appear over the course of season 3 and determine the endgame for Jimmy/Saul/Gene.

And that’s what separates BCS from most other TV shows.  TV is formulaic out of necessity. It must follow a tight schedule, satisfy the sponsors, and is therefore predictable.  The good guys prevail in most crime dramas, and problems are wrapped up in 30 minutes in the average sitcom.  BCS is not formulaic, and is therefore harder to predict.  It also has an amazing cast, both the leads and all the interesting side characters, is well written, masterfully directed, has depth and dimension, unexpected plot twists, and in my humble opinion is one of the best shows on television today.   Looking forward to April 10th.